Generation of Electricity from Wind

A wind turbine consists of the following essential parts that assist in the generation of electricity:
· Rotor/blades-conversion of energy into rotational shaft energy.
· Nacelle-includes the drive train that contains a generator and gearbox, though not all wind turbines use a gearbox.
· Tower- that supports the rotor and drive train
· Electronic equipment such as controls and cables that assist in the overall production of wind energy. 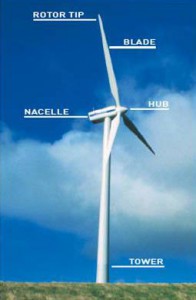 The rotor blades rotate around the horizontal hub. The hub is connected to the gearbox and generator within the nacelle, where all the electrical components of the turbine are located. The majority of the wind turbines around the world consist of three blades facing the wind. The wind turns the blades around and this spins the shaft. The shaft is further connected to the generator where electricity is produced. 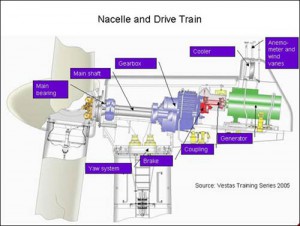 When the wind hits the rotor some of the wind energy is converted into blade rotation, after which the wind speed drops behind the rotor. The wind turbine transforms this rotation into electrical energy.

Wind energy is essentially a transferred form of solar energy. Radiation from the sun heats up various sections of the earth at different rates and varying times. This is often during the daytime and nighttime. Additionally, the sun has an effect on water bodies and land masses, as they reflect and absorb the radiation at different rates. The land masses heat up quicker than the water bodies and this hot air rises resulting in reduced atmospheric pressure on the land surface. This differential pressure provides the driving force for the cool air over the water to rush into the lower pressure areas giving rise to wind.

A capacitor is used to store electrical energy. It consists of terminals that connect to two metal plates separated by a dielectric that prevents the plates from touching each other. 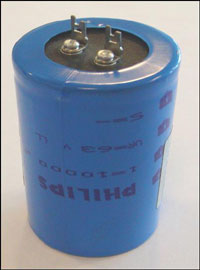 The capacitor is charged to the greatest potential present on the grid , and if the level falls in the circuit, the capacitor automatically releases electrons to ‘replace’ the deficit. This results in less ripple in the current, improving the quality.

A thyristor is a solid state semi-conductor device similar to a diode, consisting of an additional terminal used to switch it on. As long as there is sufficient current running through the thyristor it will remain on. Silicon controlled rectifiers and thyristors are identified as synonymous The thyristor contains 2 transistors.

A transistor works like a valve which can open/close the current continuously according to the input signal (trigger signal). The thyristor is used with power factor correction to give a smooth transition of full load current from the generator to the grid and to smooth start larger electric motors. The value of the trigger signal is increased gradually and allows more and more current/power to pass from the generator to the grid (Vestas training module GB110-001).

What Is An Asynchronous (Induction) Generator ?

The Asynchronous Generator is a very reliable generator that was originally designed as an electric motor but is used as a generator and tends to be comparatively inexpensive and has some mechanical properties that are useful for wind turbines. There is a very important element that makes the asynchronous generator different from the synchronous, that element being the Cage Rotor. In fact one third of the world’s electricity consumption is used for running induction motors driving machinery in factories, pumps, fans, compressors, elevators, and other applications where you need to convert electrical energy to mechanical energy. The generator has a simple mechanical configuration with few wear parts. Apart from the special shape of the slipping rotor, the machine neither has slip rings nor brushes. Therefore it requires low maintenance, has a long service life and a robust design.

Induction generators work well with single phase or three phase systems that are interconnected to the utility, as an inducting system requires no governor controls. Induction generators require excitation to operate thus they are ideally suited for interconnection with utility applications. In the single phase operations, it is possible to utilize induction motors as generators to obtain near three phase efficiency by connecting capacitors to the other unused leg of the motor. By doing this the generator will run smoothly operating near one hundred percent (100%) power factor (PF).
The Cage Rotor

The rotor consists of a number of copper or aluminium bars which are connected electrically by aluminium end rings.

The picture to the left shows how the rotor is provided with an “iron” core, using a stack of thin insulated steel laminations, with holes punched for the conducting aluminium bars. The rotor is placed in the middle of the stator, which in this case, is a 4-pole stator which is directly connected to the three phases of the electrical grid. The rotor automatically adjusts itself to the number of poles. The same stator can therefore be used with a wide variety of poles.

When the current is connected, the machine will start turning like a motor at a speed slightly below the synchronous speed of the rotating magnetic field from the stator. There is a magnectic filed that moves relative to the rotor bars which offer very little resistance to the current, since they are short circuited by the end rings. The rotor then develops its own magnetic poles, which in turn become dragged along by the electro-magnetic force from the rotating magnetic field in the stator. The diagram below gives insight on the operation.

When operating in conjunction with a large power grid, a standard single or three phase motor may be used as a generator. In this mode of operation the motor draws its excitation current from the power company grid. The nominal speed of the motor, and consequently that of the turbine, is therefore determined by the line frequency. Driven by the turbine with positive slip, the motor acts as a generator feeding power into the grid.
It is important to note that the operating speed is based on line frequency and the individual slip factor.

If the speed of the generator is increased above 1500 Rotation per minute (rpm) the resultant effect will be that the rotor will move faster than the rotating magnetic field from the stator. This will then facilitate the induction of a strong current in the rotor. Power supply transferred as an electromagnetic force to the stator can be increased by simply cranking the rotor harder, this will then result in an increase in the amount of electricity converted.

The speed of the asynchronous generator will vary with the turning force (moment, or torque) applied to it. In practice, the difference between the rotational speed at peak power and at idle is very small, about 1 per cent. This difference in per cent of the synchronous speed is called the generator’s slip. Thus a 4-pole generator will run idle at 1500 rpm if it is attached to a grid with a 50 Hz current. If the generator is producing at its maximum power, it will be running at 1515 rpm.

It is a very useful mechanical property that the generator will increase or decrease its speed slightly if the torque varies. This means that there will be less tear and wear on the gearbox. (Lower peak torque). This is one of the most important reasons for using an asynchronous generator rather than a synchronous generator on a wind turbine which is directly connected to the electrical grid.

The asynchronous generator requires the stator to be magnetized from the grid before it works.

You can run an asynchronous generator in a stand alone system, however, it will require that capacitors which supply the necessary magnetization current be provided. It also requires that there be some left over magnetism in the rotor iron when you start the turbine. Otherwise you will need a battery and power electronics, or a small diesel generator to start the system.