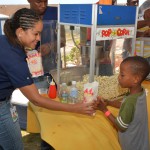 Wigton Windfarm Limited partnered with their parent company, the Petroleum Corporation of Jamaica (PCJ) to stage a back-to-school fair at their wind farm complex in Rose Hill, Manchester recently.

More than 200 students from schools located in the wind farm’s environs received free schools bags, books and other supplies to help with preparations for the new school year. The youngsters were also treated to a fun filled day of games, rides and entertainment and had the opportunity to access free health checks, courtesy of Wigton and PCJ.

Earl Barrett, General Manager of Wigton Windfarm said “Our aim is to use this fair to strengthen our relations with our neighbouring communities and give support to students and parents as they make their back-to-school preparations.”

“Education is an important area of focus for us at Wigton; we believe in training and development and where better to start than with the youngsters in communities that are closest to us,” he added.
Group General Manager of the PCJ, Winston Watson said “The Back-to-School period can be particularly challenging and the PCJ is happy to have supported Wigton in staging the fair because we know it will alleviate some of the pressures being felt by parents and students at this time.”

Wigton Windfarm is the largest wind energy facility in the English-speaking Caribbean. It currently operates two generating plants with combined capacity of 38.7 MW. The company’s wind farm complex is now under expansion with a new 24 MW generating facility scheduled to be completed in early 2016.

View all posts by: